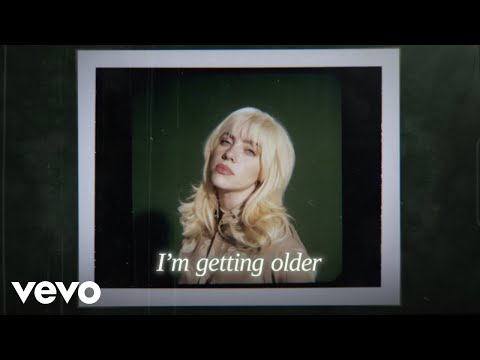 Getting Older Lyrics : from the album “Happier Than Ever“, The English song “Getting Older” lyrics is written by Finneas & Billie Eilish and produced by Finneas.

I’m getting older
I think I’m aging well
I wish someone had told me, I’d be doing this by myself
There’s reasons that I’m thankful
There’s a lot I’m grateful for
But it’s different when a stranger’s always waiting at your door
Which is ironic
‘Cause the strangers seem to want me more than anyone before (Anyone before)
Too bad, they’re usually deranged

Last week, I realized I crave pity, when I retell a story
I make everything sound worse
Can’t shake the feeling that I’m just bad at healing
And maybe that’s the reason every sentence sounds rehearsed
Which is ironic
Because when I wasn’t honest, I was still being ignored (Lying for attention just to get neglection)
Now we’re estranged

Things I once enjoyed
Just keep me employed now
Things I’m longing for, someday, I’ll be bored of
It’s so weird
That we care so much, until we don’t

I’m getting older
I’ve got more on my shoulders
But I’m getting better at admitting when I’m wrong
I’m happier than ever
At least that’s my endeavor
To keep myself together and prioritize my pleasure
‘Cause to be honest
I just wish that, what I promise would depend on what I’m given (Not on his permission, wasn’t my decision)
To be abused

Things I once enjoyed
Just keep me employed now
Things I’m longing for, someday, I’ll be bored of
It’s so weird
That we care so much, until we don’t
But next week
I hope I’m somewhere laughing, for anybody asking
I promise I’ll be fine
I’ve had some trauma, did things I didn’t wanna, was too afraid to tell ya, but now I think it’s time